Who Says Remodelers NEED CrackZapIt!? I DO! I've been one and IT WORKS!

Ever met one of those been there; done that kinda' guys? Golly, I'm starting to sound like one!

Since it is true that over the years I've been involved in almost every aspect of remodeling and re building except roofing and roof framing,

I thought I'd put a small gallery of past projects on this page AS WELL AS SOME USEFUL LINKS, to kind of back up my claim.

BUT MORE IMPORTANTLY, to let you know that CrackZapIt! was made by a guy who HAS 'been there, done that'!

I literally KNOW YOUR PAIN! (Ha!) Well, at least as far as Bleeding Finger Cracks go!

And if you missed this VALUABLE NUGGET of DIY HELP back where I was talking about carpenters needing CrackZapIt!, DO NOT miss the knowledge and wisdom of Gary Allen at Carpentry Tips and Tricks! (click it!, you won't be sorry)

Renovation requires DEMOLITION - that's TOUGH on FINGERS! There was a spa and redwood decks above this 'hole'. 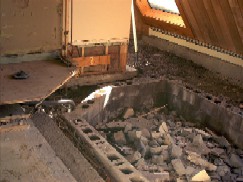 Slightly different view of that 'pit' room. Now with a nice built in bench you see over there on the right...

Covers some plumbing and a large hydronic heater, which called for lots of slats for ventilation. 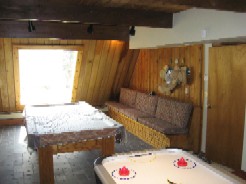 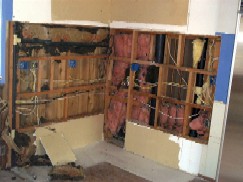 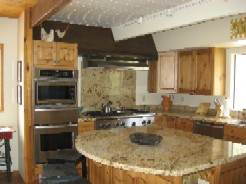 Took 2 burly guys to get the cast iron tub out...

And no room to do it!

It was CRAMMED in there!

But pretty soon it was time to make the tile shower pan and get this puppy turned around! 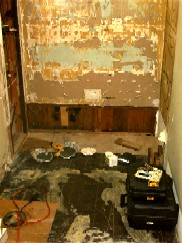 Whew! Slate is much more irregular than tile, right? But it was fun getting it done...

By now, though, my fingers were cryin' for SOMETHING! 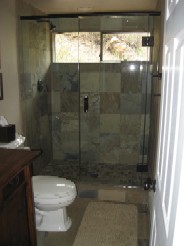 When you build new, you run into problems, have to adapt, sure.

But when you remodel?

Buddy, you KNOW you are in UNEXPLORED territory!

This built in sofa is 12' long. I wasn't going to make it and carry it in there! 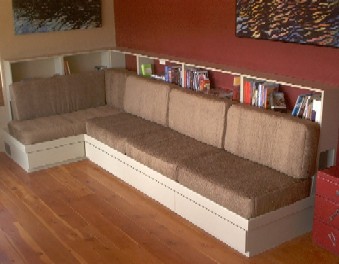 It's built in modules 3' wide, carefully screwed down, carefully adjusted, carefully molded in to look like one, monolithic piece!

The bookshelves above and full length slide drawers below are all part of it! I admit it, I'm proud of it. {;>)

Return from Remodelers to Who Needs CrackZapIt!

How To Use It

"Click on a logo below for store locations near you or online buy pages ..."

"Thank you so much for this wonderful product. As an art teacher and child care giver I was washing my hands quite a bit. It wasn't long before I developed those painful cracks on my fingers. It got to the point where I couldn 't do the crafts I enjoy. I've tried everything but nothing worked until I used CrackZapit! Hooray! I will certainly be spreading the word about this miracle in a tube as I keep spreading it on my sore, cracked digits.Thanks again ! "

"We purchased CrackZapIt! On vacation this summer at Murdoch's in Craig, Colorado. My husband gets horrible cracks on his thumb and I noticed this at the checkout counter. I thought," Why not? "And purchased a tube. OMG! This was the best purchase ever !! His thumb cracks disappeared within a day. We both used it on our trip through Colorado to Yellowstone and Glacier. We now recommend it to everyone ... Thanks for a great product. "

"This is the only stuff that worked on my hand cracks .... and I've turned it on to my bartender friends in Mexico Beach, FL and they loved it !!!" (Ed.Note: Yes! It works in humid Florida where folks STILL get finger and thumb cracks!)

"I have eczema on my fingers and I tried CRACK ZAP IT and it was very soothing. It healed up so quickly like magic! It has helped tremendously and I decided to carry one tube in my purse all the time. My husband tried it on his cracked finger tips, it worked great and the result was amazing. We want to buy a few CRACK ZAP IT so we can give them as gifts to our friends and family .... "

" During the winter months, my fingers crack right at the tip on the edge of the nail. In addition to being painful it's hard to do small delicate tasks because of soreness and bandaids. I used CrackZapIt one time and over night my fingers were starting to heal and I could get rid of the bandaids. This is a "must carry in your pocket" for anyone who works outdoors. "

"I carry a tube with me all the time. It's always available to use at any time and really stops the pain of finger cracking. It helps heal the cracks in the creases of my fingers. In the winter time I'm never without it ! "

"Great for those cracks on your fingertips. I love it so much I'm getting some for my mom. Better than anything I've ever tried!"

"Heals dry cracked and bleeding fingers like magic. Nothing else even comes close. Its the only way we can get through the winter around here! Don't ever stop selling it please!"

I have found they work best together by applying the CRACKZAPIT first to any open areas, then apply the O'Keefe's. Then enjoy your painfree healing hands! "