If you're an Artist, you probably need CrackZapIt! But even more likely, you'll enjoy a minute or two looking at someone else's Art

Jackson here. By the way, you don't have to be an artist to enjoy this Little Gallery. Thanks for looking.

For any of you who like visual expression and want to play around with it, or are serious about it, don't wanna' bust your budget and still have a wide selection of materials, I have provided a link to a great, low priced, comprehensive source of Art supplies, Seminars, and classes: (opens a new window) Cheap Joe's

And here is another: To my favorite water colorist and North West Boat Painter (I like everything he does, but his BOATS float mine, that's for sure.) Eric Wiegardt.

He also gives awesome classes (one of which I got to take) on location in the U.S. and elsewhere on the Planet.

He's won a ton of awards and has written books on technique, and produced demonstration videos I happily bought myself.

And here's a TREAT: Art Teacher Lois DeWitt has an awesome site with free Art lessons, advanced lessons, and all kinds of cool stuff. You can find her here at Lois' free Art Classes 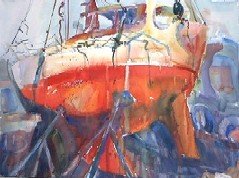 OK…boats out of the water, usually seen in repair yards, like this one at Ilwaco, WA, fascinate me.

First, I can see the whole beautiful, functional sculpture of the hull, usually hidden when boats are in use.

Second, I see myself and many others when our spirits or personalities, thoughts, ideas, are undergoing repair and revision. Especially when those articles have ceased to properly function.

Rather than seeing a ‘busted boat’, I see the 'owner' is working on the boat and has a vision for its impending repair and re-commissioning. That gives me hope.

I like the ‘big orange’ and the marks representing lines and tackle. Also the big blue jacks holding everything up.

Hey, another ‘out of commission’ boat. The title is a new one. It used to be ‘Christo’s boat.’

Christo is a guy who goes around covering and wrapping up stuff and has gotten other folks to agree with him it’s somehow aesthetically important (Art?).. and they pay him for it. Great work if you can get it.

But I liked the pun, or double meaning based on a famous old boat brand, Chris Craft. Along with that is the pun of ‘christ’, small ‘c’ intended.

Christ means anointed, which means specially chosen and equipped. (It’s fun to read the dictionary in your spare time).

You can see how this boat looks weird because its ‘house’ or cabin is partially covered up with a tarp to keep out the rainwater...

.. which will encourage rot in the older, traditional wooden boat. (BTW, saltwater doesn’t breed rot, it preserves the wood. Another scriptural reference to ferret out).

I like the blue and orange together and all the stuff and tools and scaffolding and jacks really interest me. I guess I like the ‘exploding’ sky, too. 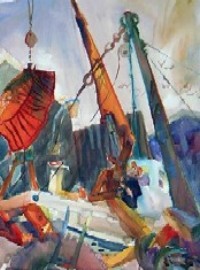 This is from an on site drawing on Long Beach Peninsula, WA, like the 2 boat pics. Then I worked that up into a large, very spare drawing in prep for watercolor.

Kind of inspired by various modern painters and artists of the first half of the 20th C who used the geometry of industrial scenery as their motif.

I was in O-ville, I'd been taking a class from Eric Wiegardt.. He later told me that's where he grew up. In fact, this scene is at the Wiegardt Oyster processing complex where some of his pioneering family still work.

It takes some time to ferret through all the 'stuff', (that I find fascinating), in the compacted composition.

The somewhat crushed oyster basket in red-orange being pulled up or lowered by the crane is the hanging center of interest. And is very unusually placed near the edge of the picture plane.

It was a little like painting a scene from 'Star Gate' to me - 'back in time'.. 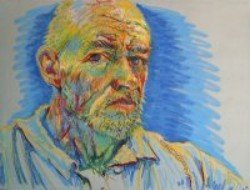 Around the turn of the 20th Century, a group called the Fauves (wild beasts), a name given by an Art critic of course, were new on the scene.

They chose to use unusual colors to express intensity of emotion, a kind of ‘x-ray’ of a subject’s inner qualities... or their own emotional response to a subject.

Vincent Van Gogh had exploded on to the Painting stage just prior to these folks. He was a powerful influence on them.

Possibly a manic depressive, he did his best to closely express his deep and sometimes disturbed feelings about his subjects.

His was a move away from the earlier Impressionism, which attempted to express the visual, abstract impression- sensual impression - of light reflected on to, and off of, objects.

Here I am in a ‘Van Gogh’ kind of mood. I like the nose best. 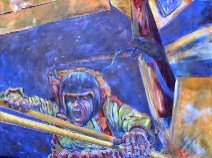 Inspired by a biographical photo from a camera that was mounted to the fuselage side of an old Howard, radial engined plane from the 40's: My third and last jump.

I'm not into astrology, but the constellation in the background is Capricorn and I was born in early January. 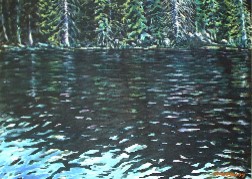 a 3'x4' oil painting, this is more closely related to Impressionism. It appears 'real', but has a distorted perspective that 'flattens' the picture plane. Mostly it is playing with the illusion of reflective water ripples, and attempting to express tranquility. 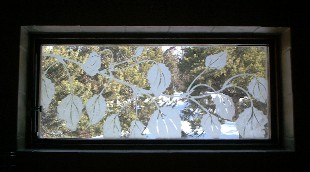 Etched Glass Window in My Shower

This window is about 1'x 3', surrounded with a redwood frame. I took an Aspen branch, drew it freehand (while 'blowing it up' about triple) on contact paper applied to the glass.

I then cut out what became the etched parts, painted acid gel on the exposed glass, let it sit, then peeled off the contact paper.

It really gives a feeling of ambiance while standing in the tile tub surround I made.

That'll wrap up the 'gallery' for now.

If you want, send me pics of your Art you really like... tell me about 'em.

Give me permission to use 'em (with attribution to you), and you might see your Artwork on another website I'm think about for teaching/coaching.

Return from artist to Who-Needs-Crackzapit?

"Click on a logo below for store locations near you or online buy pages ..."

"Thank you so much for this wonderful product. As an art teacher and child care giver I was washing my hands quite a bit. It wasn't long before I developed those painful cracks on my fingers. It got to the point where I couldn 't do the crafts I enjoy. I've tried everything but nothing worked until I used CrackZapit! Hooray! I will certainly be spreading the word about this miracle in a tube as I keep spreading it on my sore, cracked digits.Thanks again ! "

"We purchased CrackZapIt! On vacation this summer at Murdoch's in Craig, Colorado. My husband gets horrible cracks on his thumb and I noticed this at the checkout counter. I thought," Why not? "And purchased a tube. OMG! This was the best purchase ever !! His thumb cracks disappeared within a day. We both used it on our trip through Colorado to Yellowstone and Glacier. We now recommend it to everyone ... Thanks for a great product. "

"This is the only stuff that worked on my hand cracks .... and I've turned it on to my bartender friends in Mexico Beach, FL and they loved it !!!" (Ed.Note: Yes! It works in humid Florida where folks STILL get finger and thumb cracks!)

"I have eczema on my fingers and I tried CRACK ZAP IT and it was very soothing. It healed up so quickly like magic! It has helped tremendously and I decided to carry one tube in my purse all the time. My husband tried it on his cracked finger tips, it worked great and the result was amazing. We want to buy a few CRACK ZAP IT so we can give them as gifts to our friends and family .... "

" During the winter months, my fingers crack right at the tip on the edge of the nail. In addition to being painful it's hard to do small delicate tasks because of soreness and bandaids. I used CrackZapIt one time and over night my fingers were starting to heal and I could get rid of the bandaids. This is a "must carry in your pocket" for anyone who works outdoors. "

"I carry a tube with me all the time. It's always available to use at any time and really stops the pain of finger cracking. It helps heal the cracks in the creases of my fingers. In the winter time I'm never without it ! "

"Great for those cracks on your fingertips. I love it so much I'm getting some for my mom. Better than anything I've ever tried!"

"Heals dry cracked and bleeding fingers like magic. Nothing else even comes close. Its the only way we can get through the winter around here! Don't ever stop selling it please!"

I have found they work best together by applying the CRACKZAPIT first to any open areas, then apply the O'Keefe's. Then enjoy your painfree healing hands! "